“We are grateful to Judge Leasure for his leadership and service to the people of Western Maryland as a Circuit Court judge for more than 32 years.  His stellar judicial career is marked by a commitment to access to justice, fairness and integrity in the judicial process, and the rule of law,” said Chief Judge Barbera.  “With the appointments of Judge Long and Judge Finan, the legacy of extraordinary leadership in the western part of our state continues, as they are both accomplished and well-respected jurists.”

Judge Long was appointed to the District Court of Maryland by then-Governor Robert L. Ehrlich, Jr., in June 2004 and was elevated to the Circuit Court in December 2005.  Before becoming county administrative judge in June 2011, Judge Long served as an associate judge on the Circuit Court for five years.  Judge Long is currently a member of the Conference of Circuit Judges and member of the Court Access and Community Relations Committee of the Maryland Judicial Council. 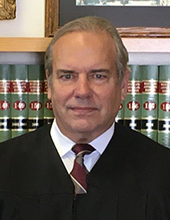 “I am honored to have been appointed to succeed Judge Leasure as the circuit administrative judge and I commend him on three decades of excellent judicial leadership,” said Judge Long. “I thank Chief Judge Barbera for her confidence in me, and I hope to do as fine a job as Judge Leasure has done over the years.  I am grateful for the opportunity to continue to serve the people of Maryland,” Judge Long added.

Judge Long received his Juris Doctor from the University of Maryland and, after being admitted to the Maryland bar in 1973, began his legal career as a private practitioner.  In 1979, he became an assistant state’s attorney for Washington County, and was later promoted to deputy state’s attorney.  In 1982, he was elected as the State’s Attorney for Washington County, and served until 2004, when he was appointed to the District Court.

Judge Finan was first appointed to the District Court of Maryland in June 1987 by then-Governor William Donald Schaefer.  He was elevated to the Circuit Court for Allegany County by then-Governor Parris N. Glendening in June 2002.  Judge Finan serves on the Legislative Committee of the Maryland Judicial Conference.

“I am committed to serving the people of Allegany County, and I am grateful for the opportunity to lead in my new capacity as administrative judge,” said Judge Finan.  “I thank Chief Judge Barbera for this appointment, and I am delighted to have worked with Judge Leasure during his tenure on the bench,” said Judge Finan.

Judge Finan earned his Juris Doctor from the University of Baltimore School of Law in 1975, and was admitted to the Maryland Bar the same year.  He served as a law clerk to former-Chief Judge Robert C. Murphy, Court of Appeals. Judge Finan worked in private practice as an associate at Walsh, Walsh & Reinhart before being appointed to the District Court of Maryland.

Note:
For a higher-resolution photograph of the judges, please contact the Office of Communications and Public Affairs, (410) 260-1488.