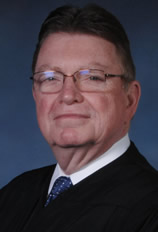 As administrative judge, Judge Hughes will oversee the administration of the Carroll County Circuit Court, its budget and procurement functions, and trial calendars to ensure the effective and expeditious resolution of cases.

“Judge Hughes has provided more than 10 years of exceptional service to the citizens of Carroll County since his appointment to the Circuit Court.  His leadership and management skills make him an excellent choice to take on these administrative responsibilities, and I look forward to working with him in this new role,” Maryland Court of Appeals Chief Judge Mary Ellen Barbera said Thursday when she named Judge Hughes as county administrative judge.

Judge Galloway will retire on January 6, 2016, after more than 16 years of service on the bench.  He was appointed to the Circuit Court for Carroll County in November 1999 and named as county administrative judge in June 2003.  “I have had the good fortune to be able to serve the public by doing a job that I love with people I respect,” Judge Galloway said.  “It has been a privilege to get to know and work with Judge Hughes and I am pleased to leave the administration of the court in his capable hands.”

“Judge Galloway has done a remarkable job as administrative judge of this court, and I will be drawing on his example of leadership,” Judge Hughes said.  “It is an honor to have this opportunity to further serve the citizens of Carroll County by promoting judicial excellence and timely justice.”

Judge Hughes, who was born in Baltimore, attended Baltimore’s Cardinal Gibbons High School and the University of Maryland Baltimore County.  A former teacher at his high school alma mater, he also served in the U.S. Army.  In 1976, he graduated with honors and received his Juris Doctorate from the University of Maryland School of Law, and was admitted to the bar the same year.  Judge Hughes served as a law clerk to Judge John N. Maguire, Baltimore County Circuit Court.

Formerly president of the Carroll County law firm of Hollman, Hughes, Maguire, Timchula & Titus, Judge Hughes was appointed to the Carroll County Circuit Court in May 2004.  He was a member of the Judiciary’s Civil Law and Procedure Committee from 2007-10 and served as committee chair from 2010-13.  He has served on the Judiciary’s Conference of Circuit Judges since 2011 as circuit representative, Fifth Judicial Circuit, and since 2014, he has served on the Legislative Committee of the Maryland Judicial Council.