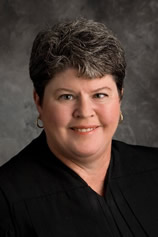 “Judge Solt is highly qualified to take on the leadership role of administrative judge of the court.  She has provided more than 18 years of exceptional service to the citizens of Frederick County since her appointment to the Circuit Court, consistently demonstrating strong leadership skills.  I look forward to working with her in this new role,” said Maryland Court of Appeals Chief Judge Mary Ellen Barbera.  “I want to offer my sincere thanks to Judge Dwyer for his dedicated service to the people of Frederick County and for his effective and efficient management of the court as administrative judge for the past 25 years.”

As administrative judge, Judge Solt will oversee the administration of the Frederick County Circuit Court, its budget and procurement functions, and trial calendars to ensure the effective and expeditious resolution of cases.

“I am honored to be chosen by Chief Judge Barbera for this appointment and I welcome the opportunity to serve our Frederick community in this new capacity,” said Judge Solt.  “Judge Dwyer has done a remarkable job as administrative judge of this court.  I commend him for the leadership he has provided during his exemplary judicial career.”

She has served as presiding judge of the Frederick County Adult Drug Court Program since 2004 and as designated judge for the Advanced Science and Technology Adjudication Resource Center (ASTAR) Program since 2005.  Judge Solt has served on several Judiciary committees and is vice-chair of the Judicial Ethics Committee.  She was a member of the Governor’s Heroin and Opioid Task Force in 2015.