ANNAPOLIS, Md., October 29, 2019 – Maryland’s public law library has a new name, and on a cool, windy day in October, leaders from the Judiciary and state government gathered in Annapolis to celebrate and honor the man for whom the library is now named: Thurgood Marshall. A native of Maryland, Justice Marshall successfully argued landmark cases before the United States Supreme Court before becoming that court’s first African-American justice.

“He was the very best of us,” Court of Appeals Judge Michele D. Hotten said during the renaming ceremony on Oct. 17 in the Court of Appeals courtroom. Judge Hotten chairs the Harry A. Cole Judicial Council, which is named in honor of the Court of Appeals’ first African American judge. “Justice Marshall envisioned the U.S. Constitution as the blueprint, the DNA, the vehicle that served to end legal segregation and racism, protect individual rights, and achieve racial equality.”

Thurgood Marshall was born in Baltimore in 1908, the son of a country club steward and an elementary school teacher, and the grandson of a slave who escaped to Baltimore. Barred from attending the University of Maryland law school due to its segregationist admissions policy, Marshall graduated from Howard University School of Law in 1933.

He started a private practice in Baltimore and began working with the NAACP (National Association for the Advancement of Colored People). In 1936, Marshall joined the staff of the national NAACP, and eventually served as the executive director of the NAACP Legal Defense and Education Fund. In that role, he argued several cases before the Supreme Court, including Brown v. Board of Education, which led to the 1954 ruling declaring racial segregation in public schools as unconstitutional and invalidating the “separate but equal” doctrine of Plessy v. Ferguson (1896).

Marshall served for four years as a judge on the U.S. Court of Appeals for the Second Circuit. He next served for two years as the U.S. Solicitor General, the first African-American to do so. In 1967, President Lyndon B. Johnson nominated him to the U.S. Supreme Court. The first African-American to sit on the nation’s highest court, Justice Marshall served from October 2, 1967, until his retirement on October 1, 1991.

The Maryland Thurgood Marshall State Law Library is located on the first floor of the building that houses the state’s highest courts, the Courts of Appeal Building in Annapolis. Open to the public, the library provides resources that enhance the understanding of legal information.

“Equal justice under the law necessarily requires access,” Judge Bell said. “As a court-related agency of the Maryland Judiciary, the library’s mission is to facilitate that access. The library’s mission and Thurgood’s objective are quite compatible. Thurgood Marshall moved this country closer to the more perfect union to which our Founding Fathers committed it.”

Professor Larry Gibson talked about Justice Marshall’s legacy. “Many legal historians insist that Thurgood Marshall was the most important American lawyer of the 20th century,” Gibson said. “Now that’s quite a claim, but they just might be right.”

Gibson, who is the Morton & Sophia Macht Professor of Law at the University of Maryland Francis King Carey School of Law, has been studying Thurgood Marshall and his career for 20 years.

“Marshall certainly had a dramatic and lasting impact on shaping our Constitutional law. And it really is hard to identify another lawyer who had a greater impact,” Gibson said. “Marshall’s cases shaped and reshaped American law as to housing, criminal justice, employment, … education, freedom of speech and assembly, transportation, and voting rights. He influenced our understandings of the due process clause, the equal protection clause, the First Amendment and the concept of state action.”

Steve Anderson, Director of the Maryland Thurgood Marshall State Law Library, wanted to find a tangible connection between Justice Marshall and the law library, so he set out to discover if Thurgood Marshall had ever visited. “If he had, … it most likely would have been during that short period of time between his days as a student and his beginning of work for the NAACP in New York,” Anderson said. “The old state library kept a sign-in log of library users back in the day, and we still keep that log book in our Special Collections Room.” After carefully searching logs from the early 1930s, Anderson turned to the page headed “November 1934.”

“And there was his signature, fourth from the top, and as plain as day -- Thurgood Marshall, Baltimore, Maryland,” Anderson said. While the log does not reveal why the young lawyer had traveled to Annapolis from Baltimore to use the library, Anderson said, “I like to think that Justice Thurgood Marshall was studying at the State Library as he strategized a path toward equality.”

The bill to rename the library was passed in 2019 by the Maryland General Assembly and signed into law by Gov. Larry Hogan. Chief Judge Mary Ellen Barbera, who led the event, reminded those gathered of the significance of the name. “The people’s law library … now and forever carries his name, a sign that we in Maryland have embraced Justice Marshall’s charge that the doors of justice open wide to all,” Chief Judge Barbera said. “Our challenge -- yours and mine, each and every one of us -- is to honor our commitment to one another to help make that so. Our collective vigilance, courage, and commitment are necessary today, tomorrow, and every day thereafter. Justice Marshall showed us how. And now it is our turn, our duty to deliver the promise of equal justice.”


Watch the video of the celebration: 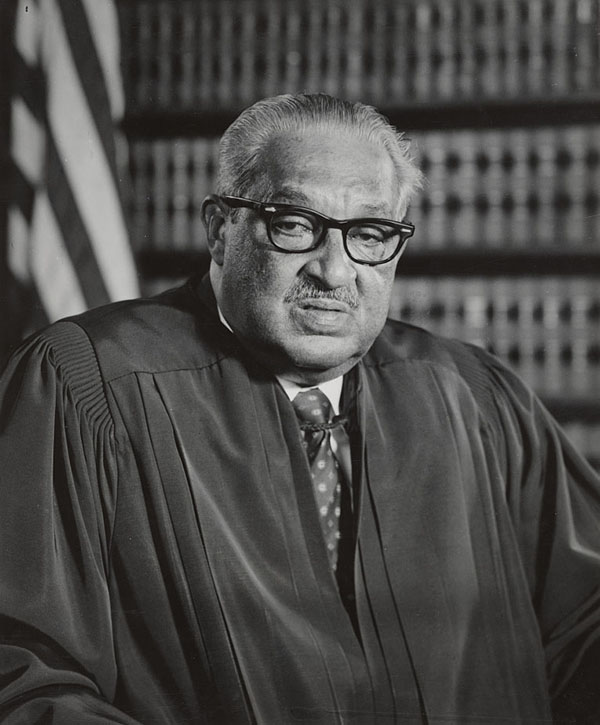 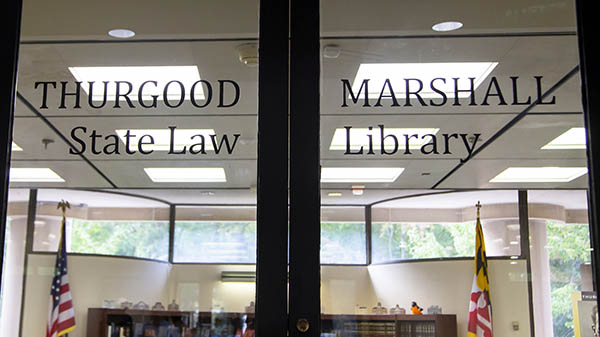 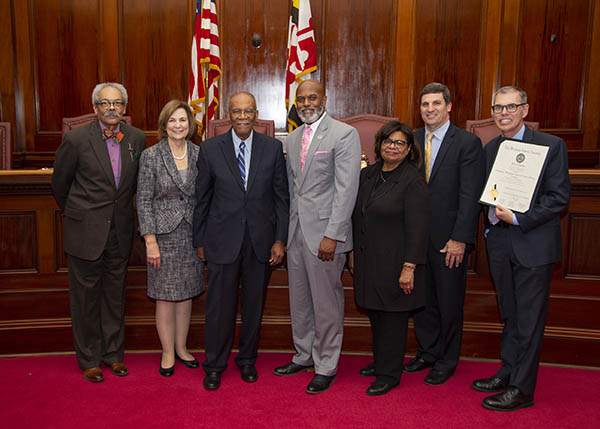 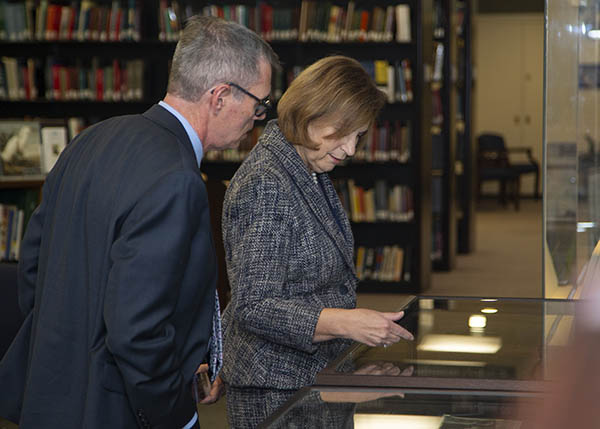 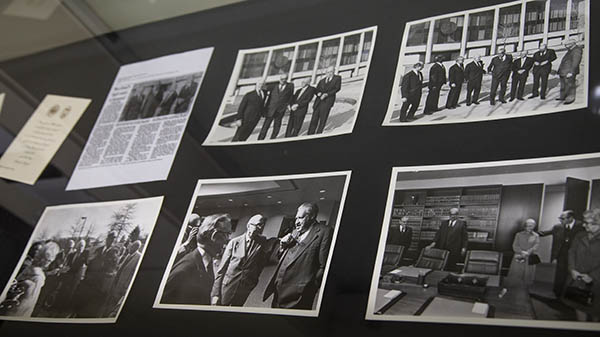 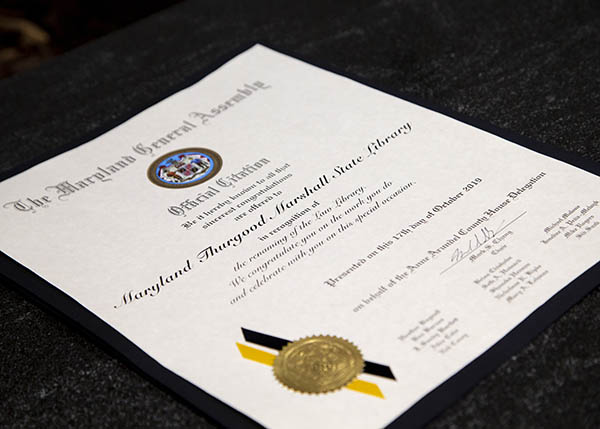 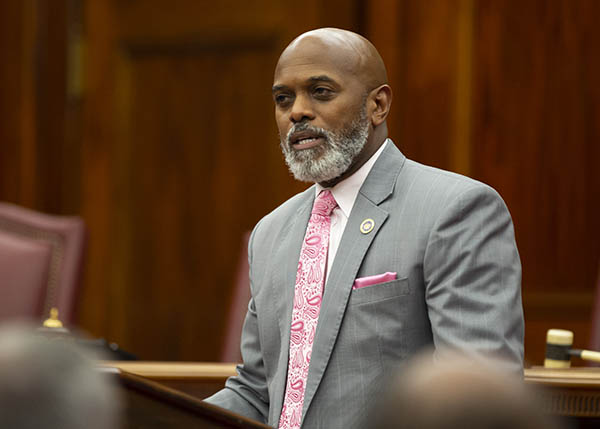 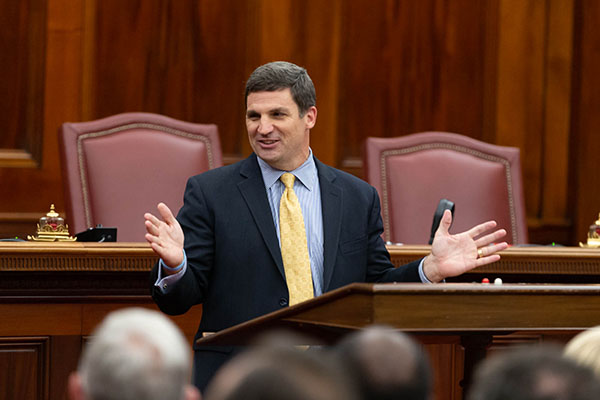 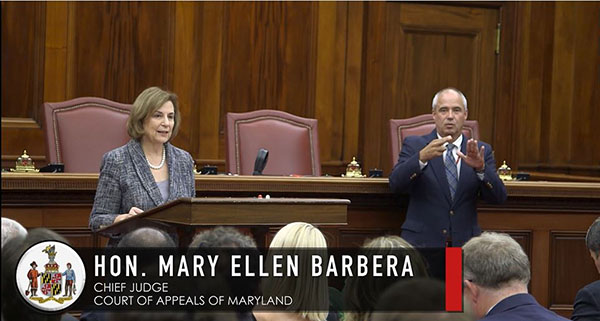 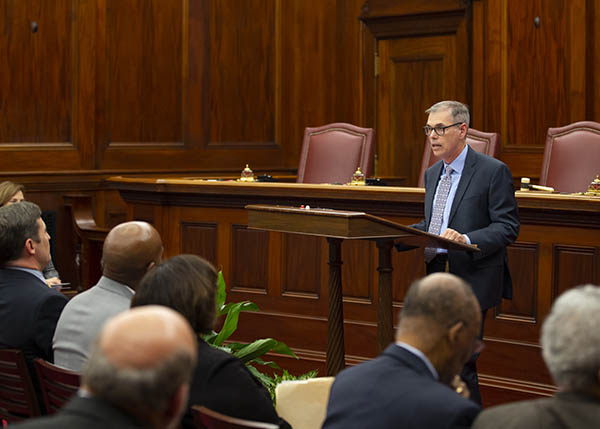