The Honorable Daniel M. Long, currently serving as Administrative Judge for the First Judicial Circuit, will retire on December 31, 2016, and has asked that his successor be designated in order to effectuate a smooth transition. 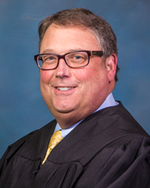 Judge Wilson was appointed to the Circuit Court for Dorchester County in June 2004 by then-Governor Robert Ehrlich, serving as County Administrative Judge from the time of his appointment.  A former assistant state’s attorney for Wicomico County and senior assistant state’s attorney for Caroline County, Judge Wilson had been in private practice and was Standing Master (now known as Magistrate) for Domestic Relations and Juvenile Causes for the Dorchester County Circuit Court before being appointed judge.  He earned his Juris Doctor from the University of Maryland School of Law in 1983 and was admitted to the Maryland Bar that same year.

“I am honored that Chief Judge Barbera has confidence in me to the extent that she has entrusted me with this opportunity to serve,” Judge Wilson said. “This is an exciting time for the Judiciary, and I am gratified to have the chance to contribute to providing the highest standard of judicial services. It will be extremely difficult to fill Judge Long’s shoes, but I am looking forward to the challenge. He has set a wonderful example to follow.”

Chief Judge Barbera said, “We are grateful to Judge Long for his outstanding service as County and Circuit Administrative Judge, demonstrated by his thoughtful and fair leadership, and for his commitment to justice.  Judge Wilson brings leadership skills and management experience that will be invaluable as we move forward to ensure access to justice for the people of the Lower Eastern Shore and throughout Maryland.”