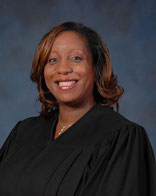 “I look forward to working with Judge Hall Johnson in her new capacity as Administrative Judge for District 5,” Chief Judge Morrissey said.  “I think she will be an effective leader and will help us continue to expand and improve court-related services for the people of Prince George’s County and throughout Maryland.  While Judge Anderson’s leadership will surely be missed in the District Court, I am pleased by the news she will continue her career in Prince George’s County by serving on the Circuit Court.”

“We rely on skilled, dedicated leaders to help the Judiciary fulfill its important mission to provide fair, effective, and efficient justice for all in Maryland and are fortunate indeed to be able to call upon Judge Hall Johnson to lead District 5 of the District Court of Maryland,” said Chief Judge Barbera. “I look forward to Judge Hall Johnson’s contributions to the Judiciary in serving the people of Maryland.”

“I thank Chief Judge Morrissey for this opportunity to serve, and I am grateful to Judge Anderson for providing an excellent example of leadership to follow,” Judge Hall Johnson said. “I am looking forward to working with the clerks, commissioners, and judges in District 5 and in other Districts to provide the highest standard of judicial services.”

Judge Hall Johnson earned her Juris Doctor from Duke University School of Law and was admitted to the Maryland Bar in 2001.  That same year, she began her legal career at McDermott, Will & Emery as a litigation associate representing major trading and investment banks.  She was an assistant state’s attorney from 2003 to 2005 and a senior associate with Dickstein Shapiro LLP from 2005 to 2012, focusing on civil litigation.  Just prior to her appointment to the bench in 2013, Judge Hall Johnson was the director of litigation at Washington Gas Light Company.