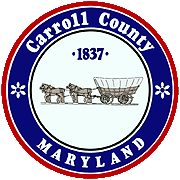 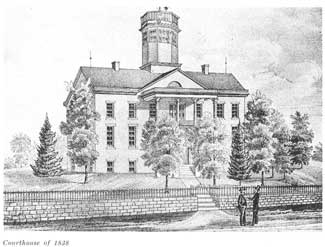 The cornerstone for the Historic Courthouse was laid by Andrew Shriver on June 13, 1838. He was assisted by Colonel Joshua Gist, brother to General Mordecai Gist of Revolutionary War fame (Battles of Long Island and Camden). James Shellman, the first mayor of Westminster, was the architect and Swope and Durbin, the two men responsible for building the Jail, also laid the masonry for the Courthouse. The Courthouse was constructed for $18,000.00 and originally consisted of the center portion of two stories, seven bays and gabled roof. Soon after completion, an ornamental cupola, the steps and a two story Greek Revival portico were added. Greek Revival architecture had become popular in the U.S. during the 1830's and 1840's, so it was only fitting that a newly formed county seat would want to show how progressive it was by conforming to national trends.

Space in the new building was apparently plentiful, as research reveals that at least one room on the second floor was leased to a local photographer, Henry B. Grammar (Daguerrean Method) in the early years of the County. In 1882, the one story wings were attached and in 1935, they were rebuilt and made larger by adding a half story.

The Courthouse that was erected in 1838 is the central portion of the present structure. One enters through double doors leading to an expansive foyer. The floors and steps are marble, most of which was quarried within this State (Harford County). There is exquisitely designed moldings encircling the original gas lights which were converted for modern use. In the earliest part of the building are four fireplaces, like the one which can be seen to the right of the entrance hall. None of them are in use today. Civil cases are presently tried in the original courtroom (known as Courtroom No. 1), while criminal cases are heard in the Courthouse Annex on North Court Street which was built in 1979. 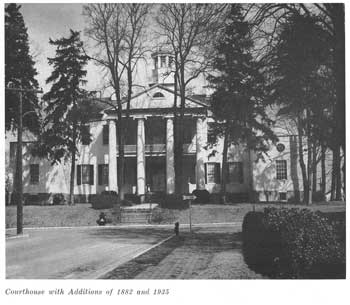 Two rooms on the first floor have been converted into smaller “non-jury” courtrooms. The first of these, Courtroom No. 3, is located in the northeast quadrant of the first floor and in 1977, replaced a portion of the Clerk’s office. The second (Courtroom No. 5), a 1986 addition, serves as the Juvenile Court, and is located in the southwest quadrant, the former location of the Orphan’s Court and the Register of Wills Office.

The Law Library, originally located on the second floor (southwest corner), has been expanded to include five inter-connected rooms located in the basement, the first floor and the second floor of the East Wing.

At the top of the eastern stairway is the two door entrance to a perfectly preserved mid-nineteenth century Hall of Justice, a room which the American Bar Association has described as “one of the most beautiful courtrooms in America.” Many of the furnishings are original. In 1937, for the County’s Centennial celebration, reproduction Windsor chairs replaced the ladder-back jury chairs and lights were converted to electricity. The beautiful solid brass chandeliers were imported from Holland in the early 1970's.

The Courthouse underwent a 10-year restoration period culminating in its rededication ceremony on October 9, 1987. The restoration project was overseen by Mr. W. Boulton Kelly and Brown, Worrall and Johnson, Inc., architects from the City of Baltimore.