The following information is adapted from The County Courthouses and Records of Maryland, Part One: The Courthouses, Annapolis:The Hall of Records Commission of the State of Maryland, 1960. The complete Kent County section, pages 104 thru 110 in PDF, is provided courtesy of the Maryland State Archives. 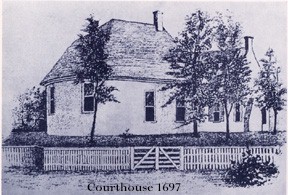 Through the passage of an act by the General Assembly of 1696, the justices of the county were authorized to purchase three acres of land to provide for a courthouse. According to records, land was purchased on the north shore of the Chester River for the fair value of 2,000 pounds of tobacco. Although the date of completion is not known, the courthouse is believed to have been used before March 23, 1697/8.

The courthouse did not survive long and records indicate it was destroyed by arson around 1720. The courthouse was rebuilt in 1720-1721 and used until the middle of the century. Due to growth in population and business, and the dilapidated condition of the present courthouse, the justices petitioned the General Assembly for funds to repair or enlarge the courthouse. An act was passed at the session of 1750 authorizing 50,000 pounds of tobacco for this purpose. 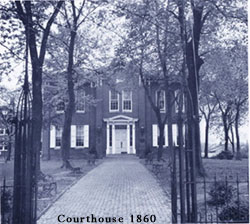 There were additional enlargements, additions, and repairs to the courthouse until in 1860 an act was passed to take down the present Courthouse and build a new courthouse on the Public Square in Chestertown. A bond in the amount of $12,000 was issued and the new courthouse was erected on the site where it exists today. The 1860 facade was retained when the courthouse was remodeled and enlarged in 1937.