The following information is adapted from The County Courthouses and Records of Maryland, Part One: The Courthouses:The Hall of Records Commission of the State of Maryland, 1960. 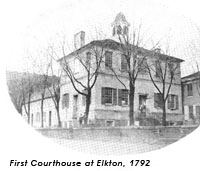 The first courthouse in Elkton was completed in 1792. A one-story brick addition was later constructed to house the Register of Wills, the Clerk of Court and the Sheriff. By the eighteen-eighties, additional space was needed, but the building was hemmed in on every side. The county commissioners had to decide whether to tear down the structure and rebuild or add a third story. 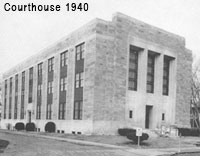 The courthouse was enlarged by removing the hipped roof. A mansard third story was added, and a tower was built in front of the building. The tower contained the entrance, a small balcony, a clock, and a semi-onion dome. The tower was topped with a weathervane in the shape of a fish. 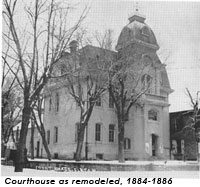 The courthouse soon became crowded and an effort was made to replace it. In 1935 an act was passed authorizing the county commissioners to spend $5,000 for property on which to build a new courthouse. The site chosen was about 200 yards from the old courthouse. Cornerstone ceremonies took place in May 1939 and building began shortly thereafter. The new courthouse building officially opened on July 26, 1940.