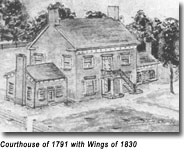 The court of Harford County met for the first time in March of 1774 in the "house wherein Thomas Miller now keeps store." No effort was made at the time to undertake construction of a courthouse. It wasn't until 1791 that the first courthouse was built on two and five-eighths acres of ground purchased in Bel Air. 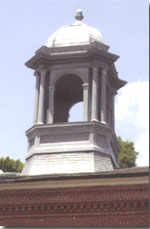 "It had wings to the north and south. The wing on the north was used for the clerk's office, and that on the south for the office of the register of wills. The courtroom was down stairs, and the floor was made of bricks. Within the rail where the lawyers and jury sat the floor was raised, and the bench, or judge's seat, was high above like a pulpit. There were two immense open fireplaces in the room, in which hickory of cordwood lengths was burned."

Fortunately, the General Assembly was in session at the time of the fire and a bill was quickly introduced and passed authorizing the construction of a new courthouse. A new brick courthouse was ready for occupancy in 1859.

The courthouse has been expanded several times over the years yet much of the original grand building is unchanged. The ceremonial courtroom on the second floor of the courthouse is an historical treasure. Curved walnut benches provide seating. The benches where the judge and clerks sit and the large oval table where attorneys face the bench are from the original courthouse.

The information is adapted from The County Courthouses and Records of Maryland, Part One: The Courthouses, Annapolis:The Hall of Records Commission of the State of Maryland, 1960.